When Stick To Your Guns’ Jesse Barnett and Stray From The Path’s Tom Williams want to calm down for a bit from living the “Hardcore-life”, they tour with their side project Trade Wind. Together with Andrew McEmany from Structures and Randy LeBoef, the guys released their debut album You Make Everything Disappear last year, but had to cancel their European Tour due to an injury. No big deal, because last week they made up for it when they played shows in Germany, Belgium, the Netherlands and the UK. We saw their gig at the rock club MTC in Cologne and here is our show review!

Trade Wind were supported by the German Hardcore band Traced By Enemies. An interesting choice as they didn’t really fit the calm Trade Wind-sound, but apparently the bookers knew that there would be quite a few Stick To Your Guns and Stray From The Path fans in the audience as their set was received pretty well. They knew how to use their moment and motivated the audience to mosh. All in all a solid performance, though their music didn’t really stand out for me, but I’ve heard them there for the first time and don’t wanna judge them prematurely. They definitely enjoyed playing the show and engaged with the audience a lot which is really all you could wish for.

A short while after Traced By Enemies’ set, Trade Wind took to the stage. They played a great set which consisted of songs from their debut EP Suffer Just To Believe and their debut album You Make Everything Disappear. In between songs, Jesse kept the crowd entertained with some stage banter such as sharing the story of why he’s wearing glasses on stage: apparently he couldn’t see his guitar properly at Impericon Festival which resulted in it being out of tune for a song. After that story it was almost impossible to not look at his glasses slipping down his nose every few minutes. It must have been quite annoying for him, but the crowd was happy to hear all the songs perfectly in tune. All in all, Trade Wind played an amazing show. Compared to Traced By Enemies, their set was very short though. I was a little baffled for a moment when the band left the stage cause it took me a while to realize that the set is really over.

Big up to both bands for working the merch booth afterwards and hanging out with their fans! We also had the chance to chat with drummer Andrew before the show. The full interview will soon be up on GENRE IS DEAD, so stay tuned!

Here are our photos from the show: 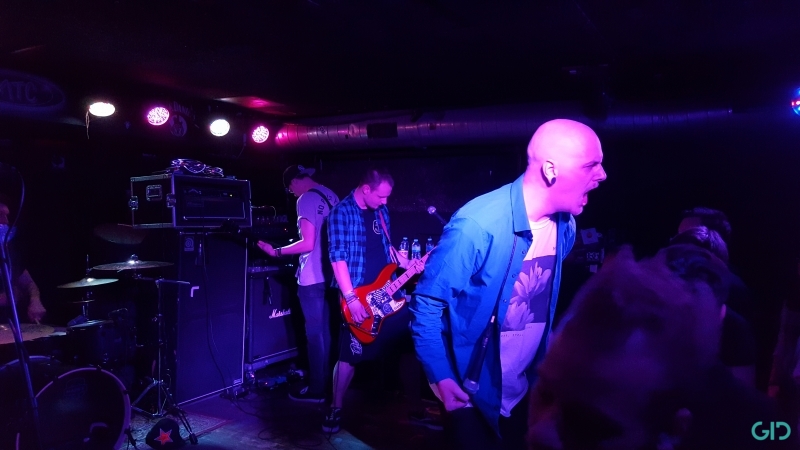 Sound of the Underground: VXUY

GENRE IS DEAD! wants to give underground artists a platform. Our "Sound of the Underground" features a new band / artist each month.

This website uses cookies to improve your experience while you navigate through the website. Out of these, the cookies that are categorized as necessary are stored on your browser as they are essential for the working of basic functionalities of the website. We also use third-party cookies that help us analyze and understand how you use this website. These cookies will be stored in your browser only with your consent. You also have the option to opt-out of these cookies. But opting out of some of these cookies may affect your browsing experience.
Necessary Always Enabled

Any cookies that may not be particularly necessary for the website to function and is used specifically to collect user personal data via analytics, ads, other embedded contents are termed as non-necessary cookies. It is mandatory to procure user consent prior to running these cookies on your website.