It was 8pm when Felix Brummer, singer of tonight’s main act Kraftklub, took the stage to announce Von Wegen Lisbeth, the five piece from Berlin, acting as tonight’s support. Armed with triangle, xylophone, synths and “normal” instruments a band is bringing along usually, they quickly managed to get the crowd to sing along to some of their known songs. Those Berliners obviously have a quite big overlap with Kraftklub when it comes to their group of fans, at least that’s what the great and cheerful atmosphere during VWL’s set suggested. The crowd was dancing, jumping and singing along. After only 30 minutes the quite young band [they’re a band since 2006 but have just released their debut album in 2016] left the stage hence their limited own repertoire of songs. After all, the crowd of a little over 9000 fans in the not sold out Westfalenhalle in Dortmund were waiting for tonight’s main act Kraftklub anyways! 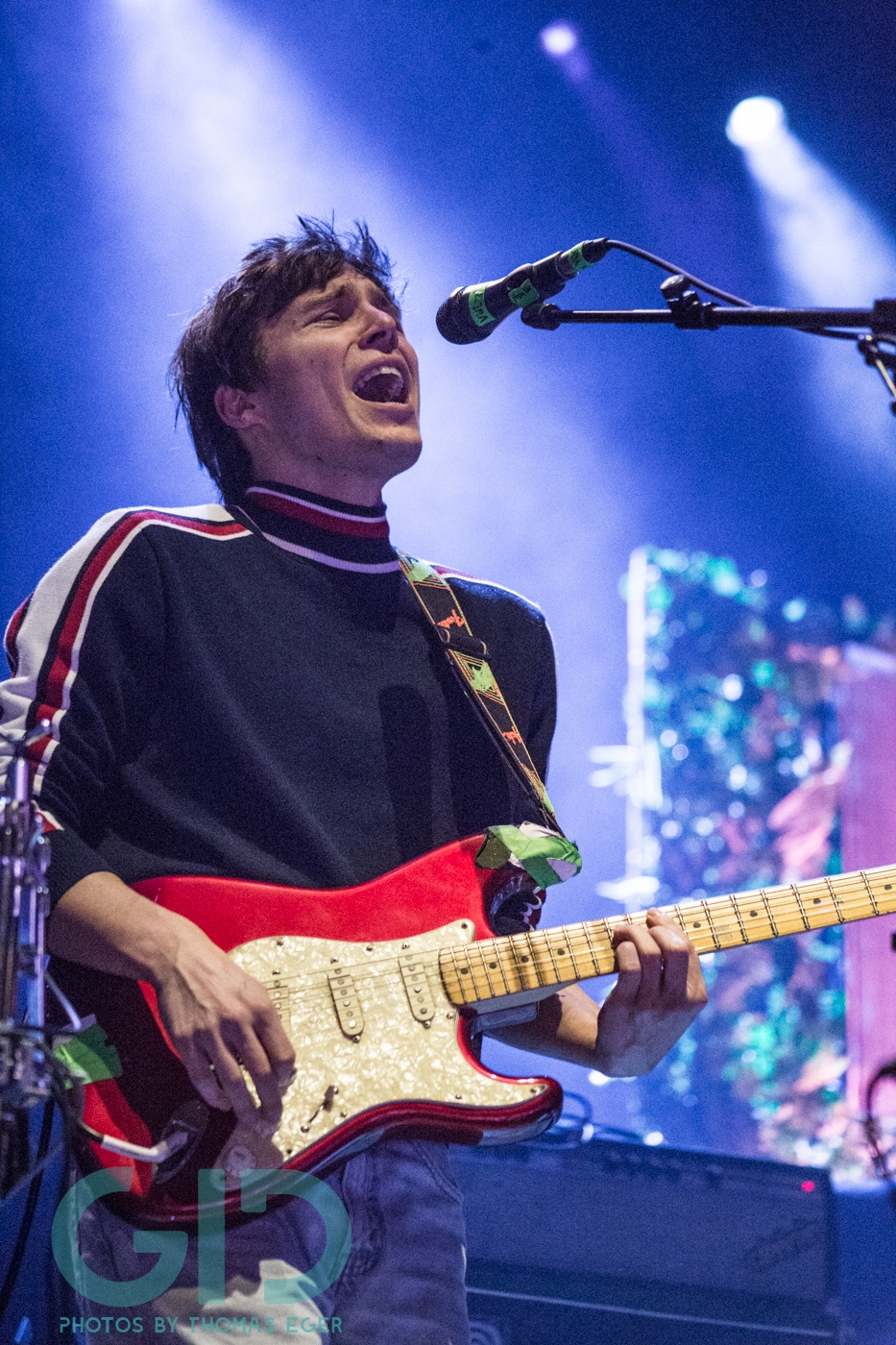 During the break a red curtain reading “Keine Nacht Für Niemand” concealed the stage and the crowd was getting more nervous by the minute. 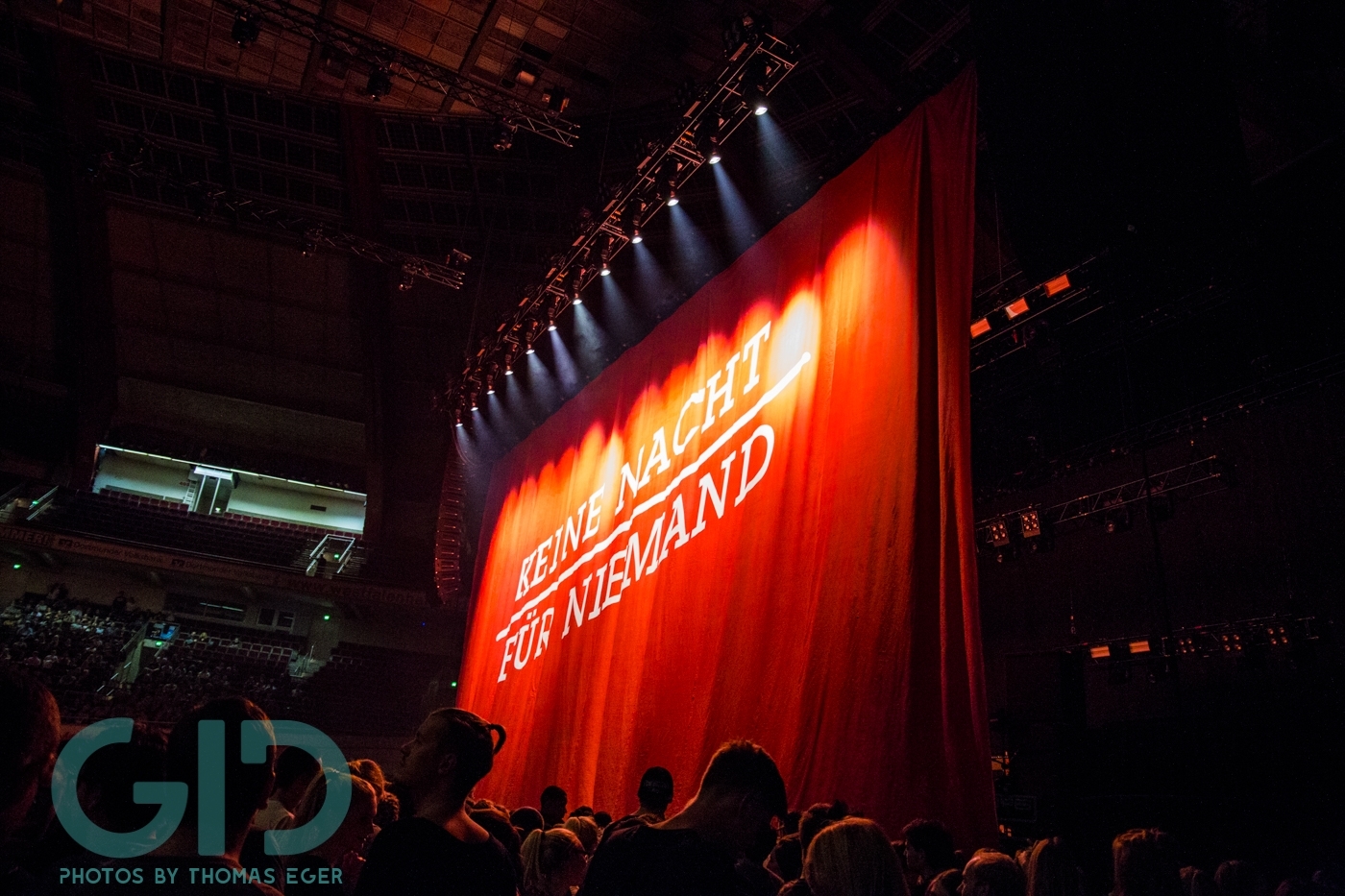 In anticipation of the show, fans already sang along to songs that got played over the PA, many of those are well known if you follow the band on social media. When the lights finally turned off in the venue, the crowd cheered of anticipation and we heard the first sounds of “Hallo Nacht” from their current album “Keine Nacht für Niemand”. When the curtain fell there was no more holding back as the crowd sang along word-perfect, screamed, danced and jumped. During “Eure Mädchen” the third song of the night, the whole band freeze-framed on stage for over a minute in which you could barely sense any movement. 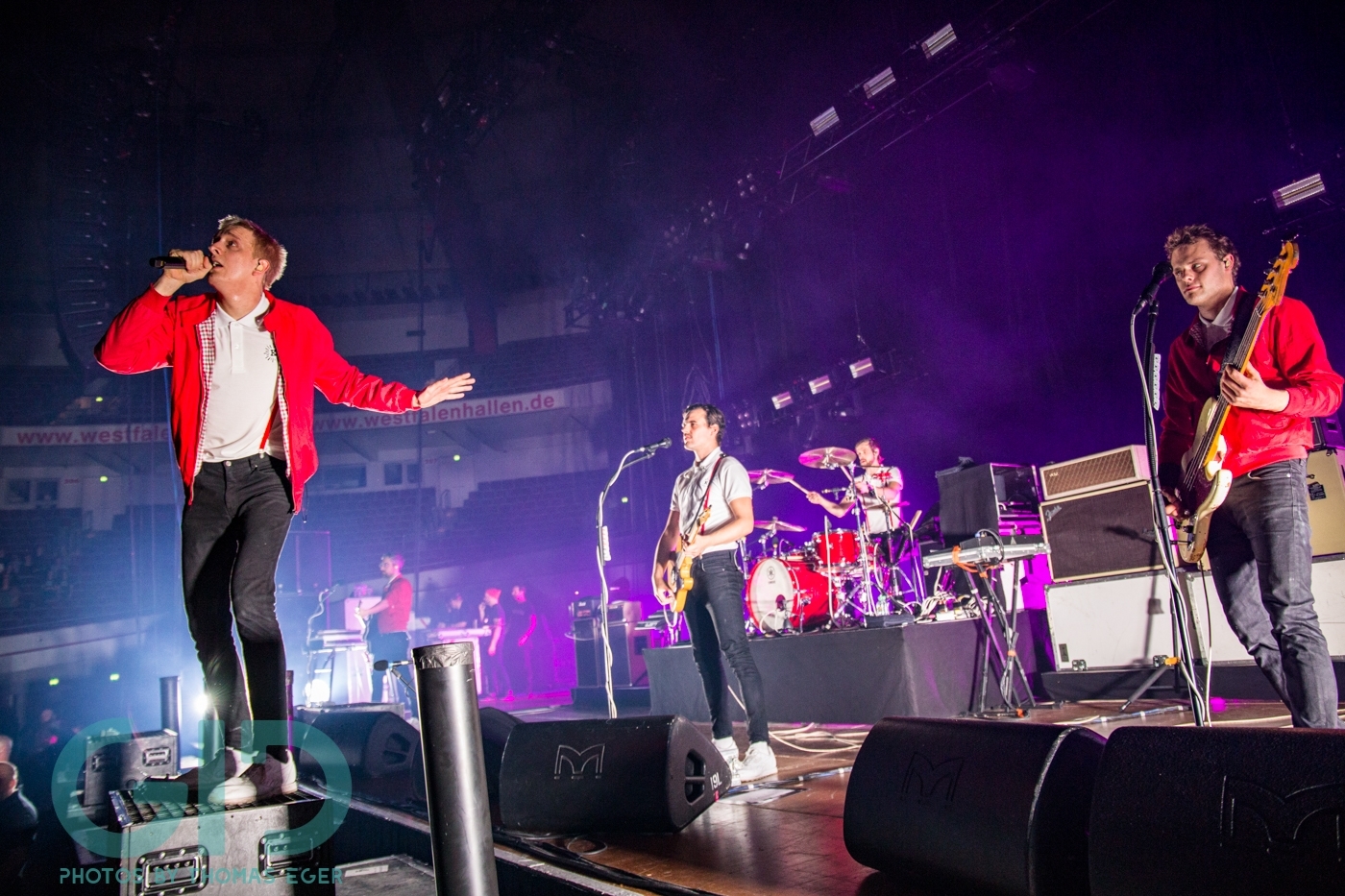 After they had moved on with songs like “Mein Leben”, “Alles Wegen Dir” and “Am Ende”, they pulled up a fan before the next song. To bring a little more variety into their set they brought a wheel of fortune with them to pick the next song that would be played. The fan, Burger, had the chance to spin the wheel for Kraftklub’s classic “Scheissindiedisko” – which he admitted he preferred, a [K]oversong, “Irgendeine Nummer” from their 2nd album “In Schwarz” or a blank which would result in a smoke break for the band. Burger was lucky as the wheel stopped at “Scheissindiedisko”, the crowd cheered for him and the show went on. 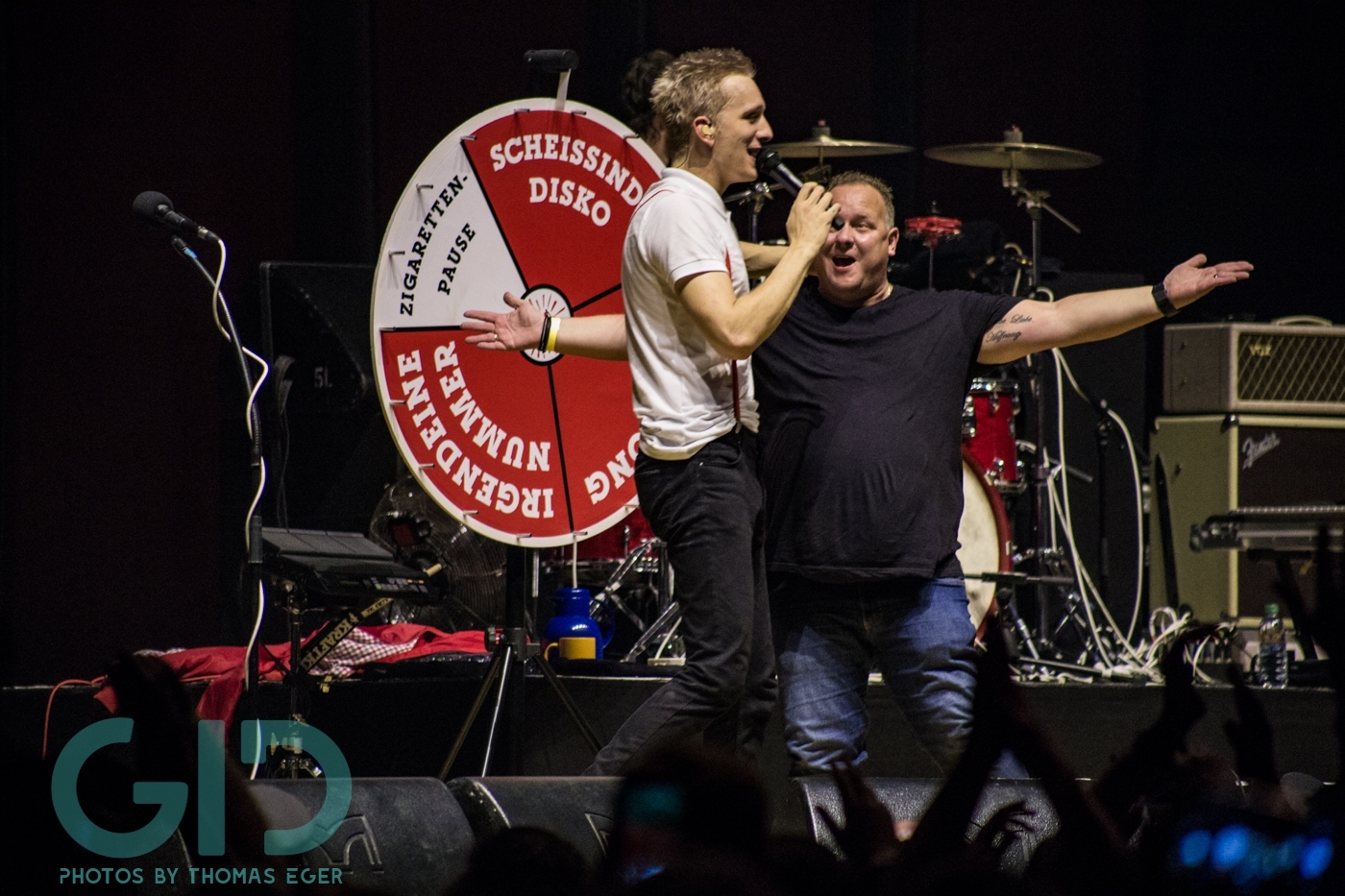 A few songs later Felix, the band’s singer, asked the crowd if they were from Dortmund or elsewhere, concluding that it didn’t matter where you came from, just for the next song everyone was from “Karl-Marx-Stadt”, a song named after the former name of their hometown Chemnitz. 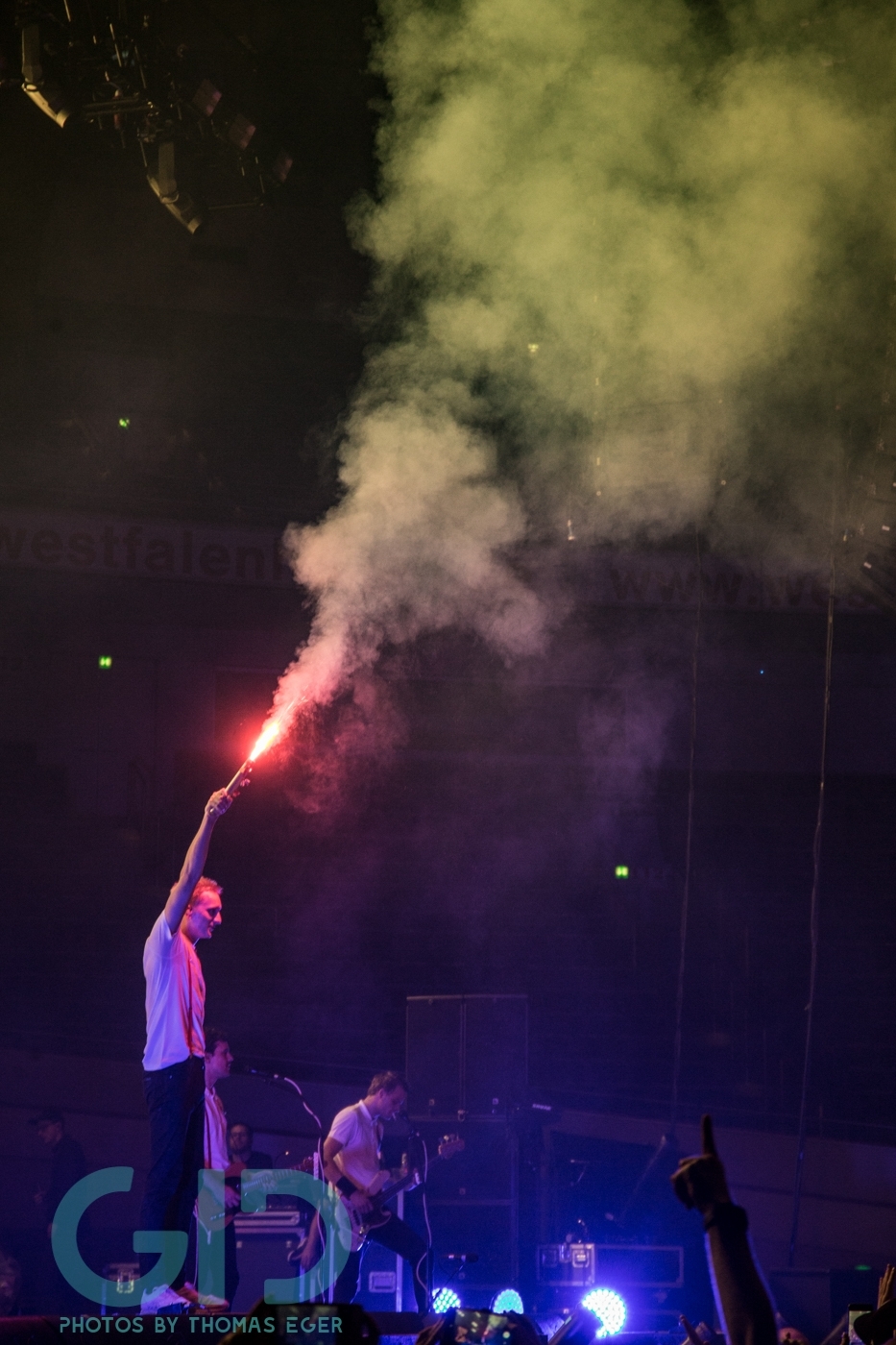 After a few more songs they brought up their support “Von Wegen Lisbeth” again to cover “Schrei Nach Liebe”, an anti-fascist song by German punk-band “Die Ärzte”. As expected the whole crowd sang along word-perfect. 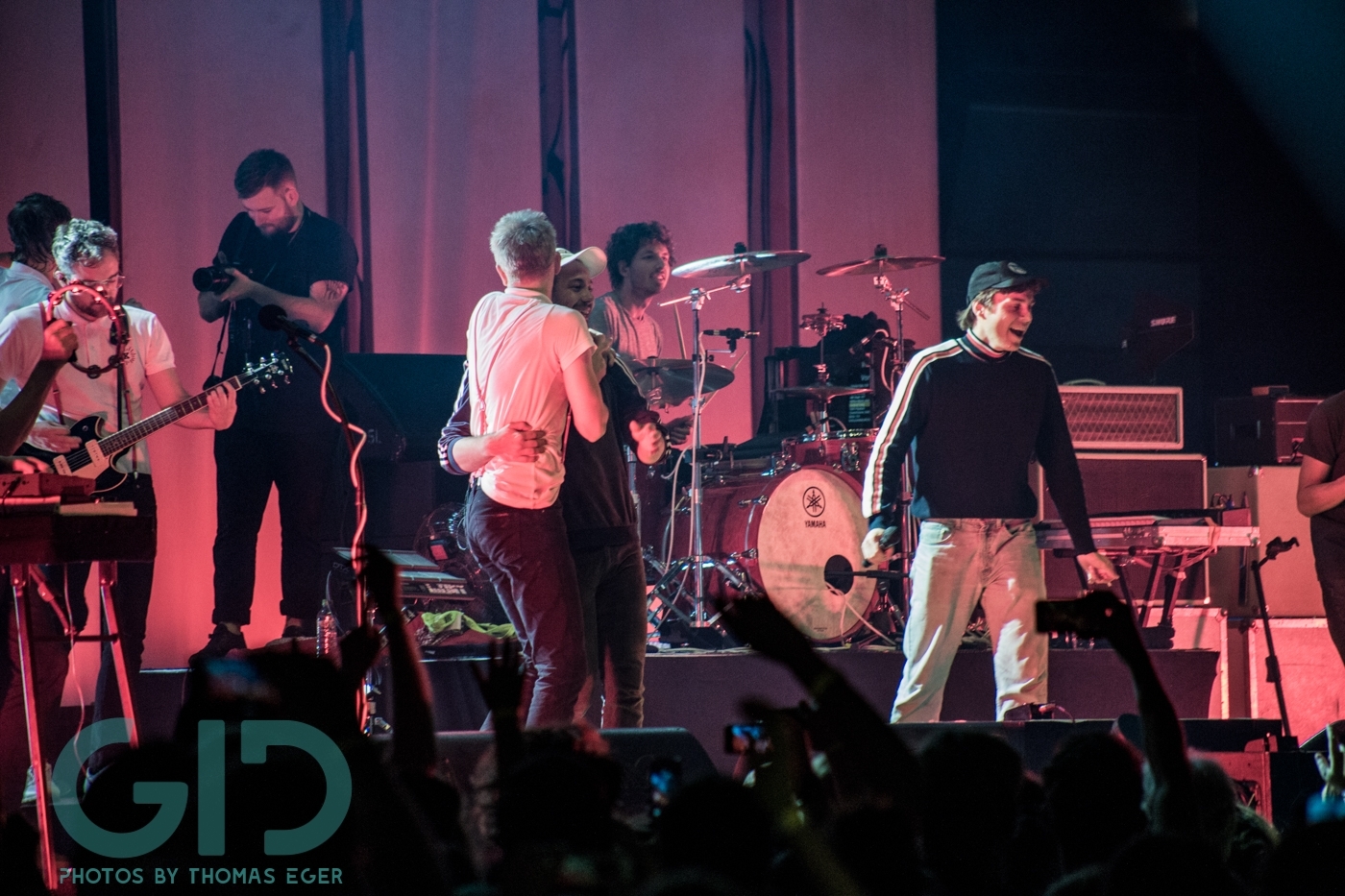 Right after that the whole band except Felix and Till Brummer [his brother who’s the band’s bass player], left the stage so they could perform “500K” a song both recorded a few years back when they cracked 500.000 likes on Facebook, a huge milestone for the band. 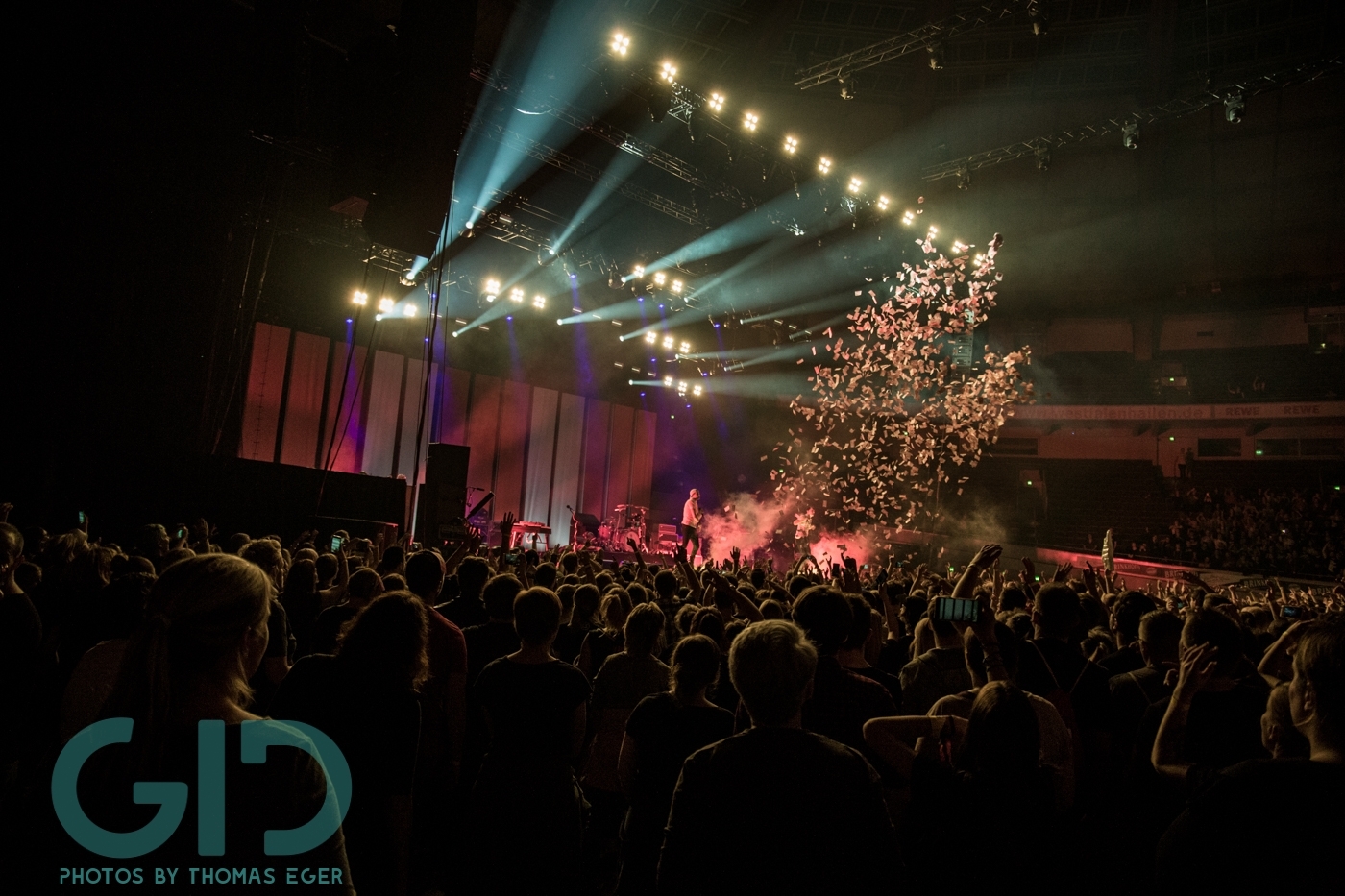 Just before closing out the main set with “Chemie Chemie Ya”, a fan-favorite of the band’s recent album, Kraftklub wanted to test the rap capabilities of their fans, stating that some crowds of the recent shows did really well trying to rap the song a capella. Right after that the crowd went on to rap the first verse, sang the bridge and the first refrain. Obviously blown away by the scenery Felix was at a loss for words only complimenting the crowd that they’ve just delivered the best rendition of that a capella of the whole tour. After playing the song the band left the stage… 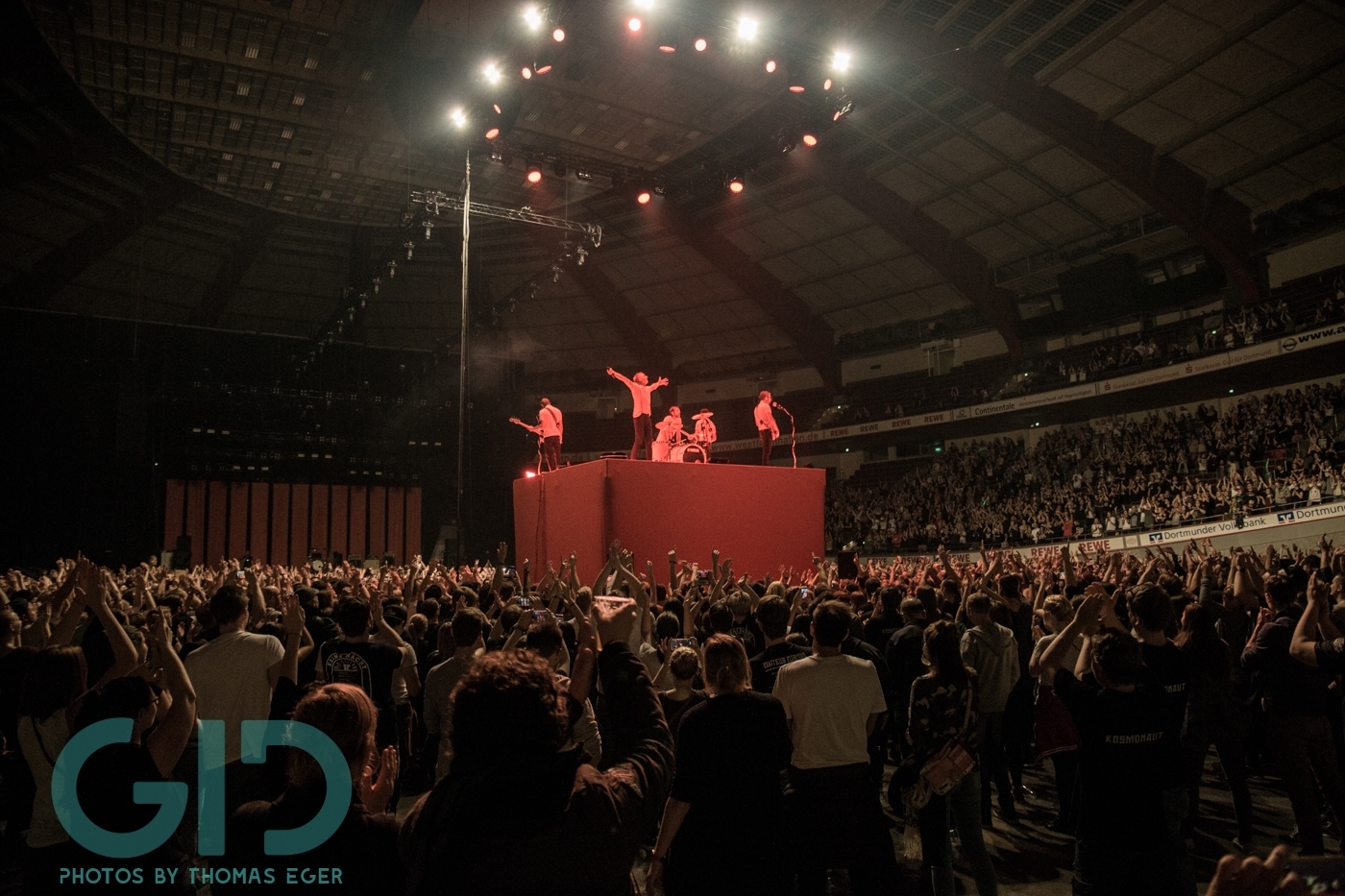 … just to switch to their B-Stage at the back of the arena!

After their smash hit “Ich will nicht nach Berlin” and anti-nazi song “Schüsse In Die Luft” the band played “Randale” a crowd favorite during which they always animate the crowd to sit down on the floor and toss litter from the floor into the air while jumping up, resulting in some kind of riot (which translates to “Randale”). 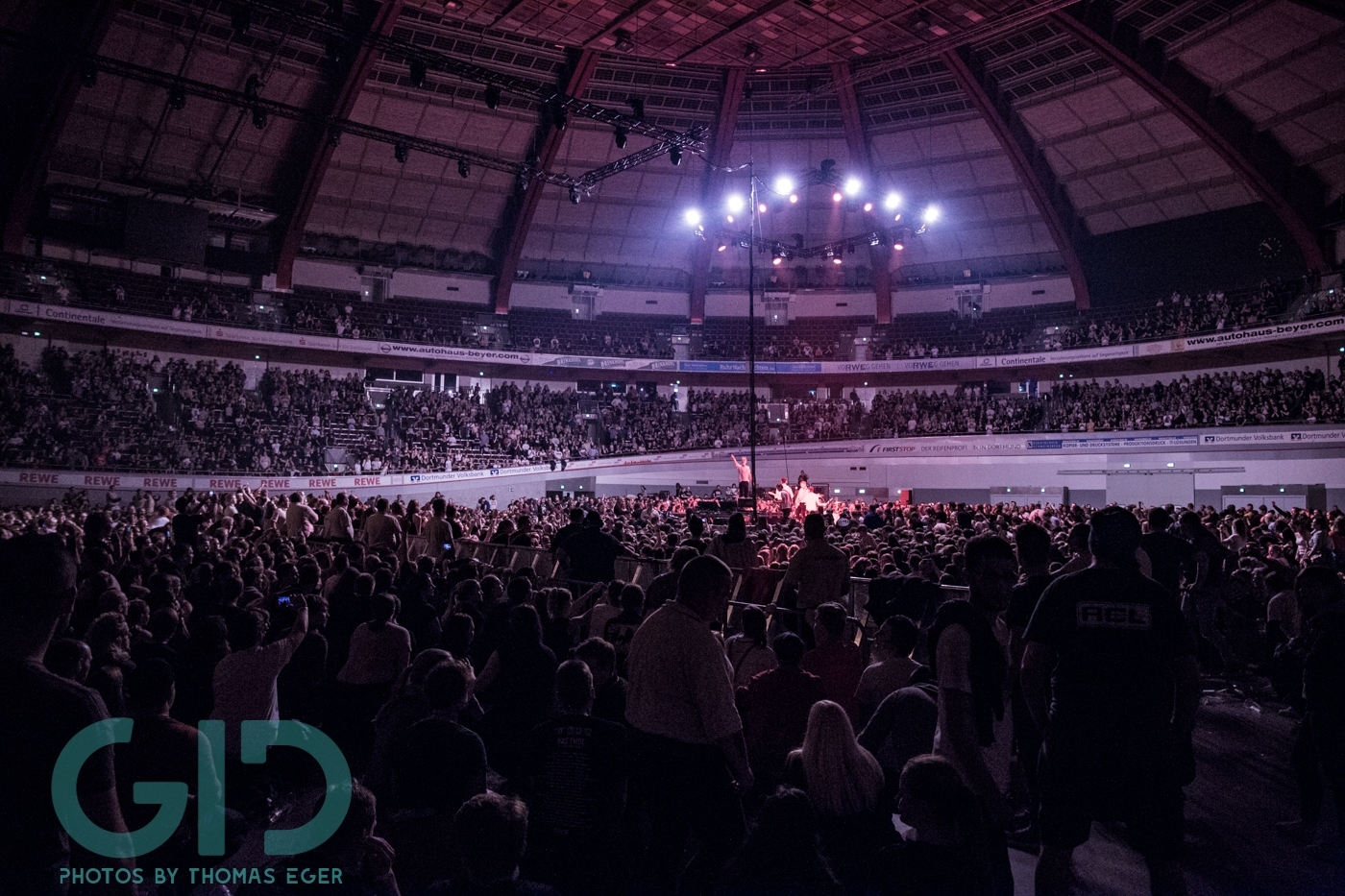 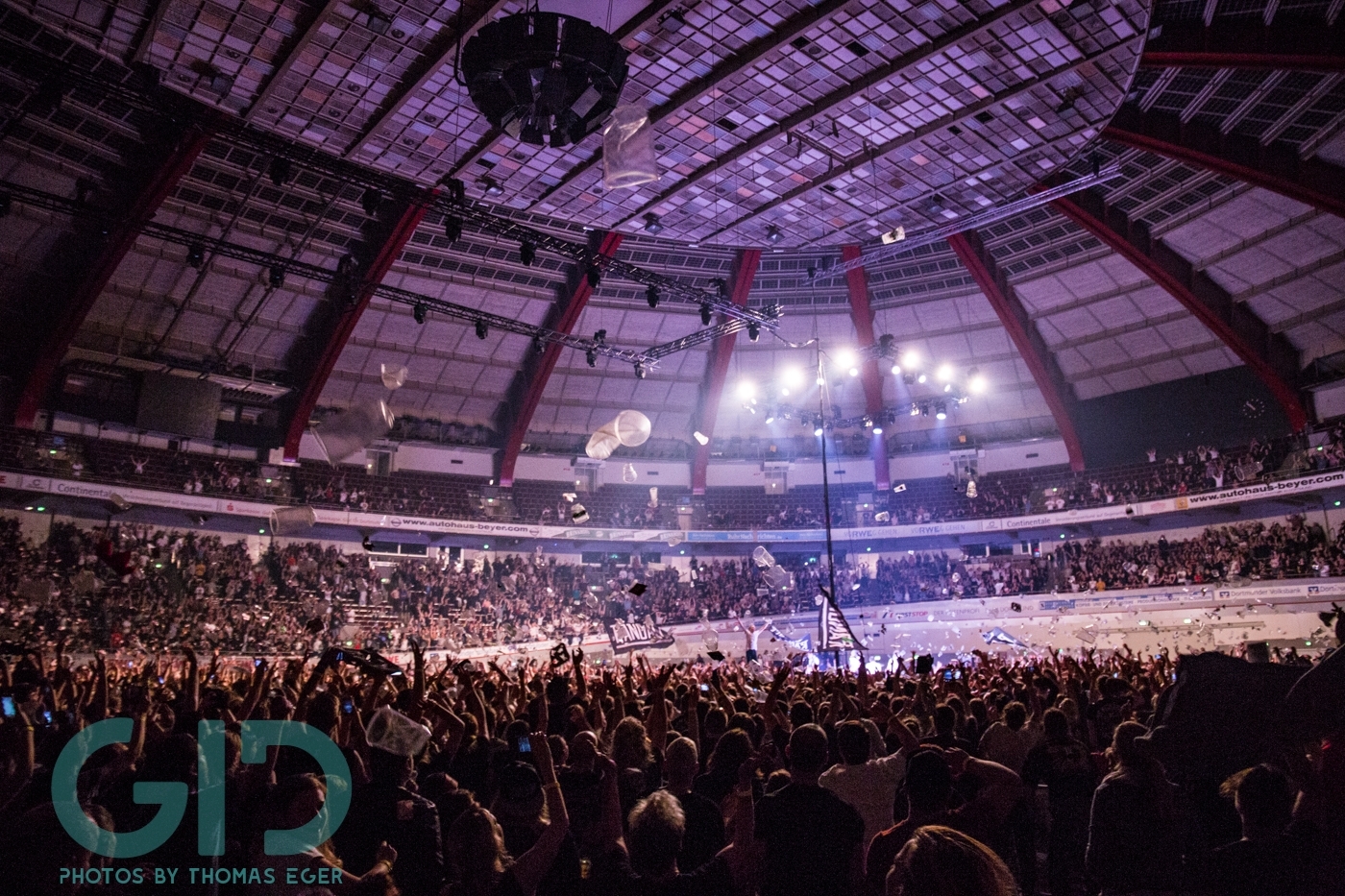 To get back to the real stage they introduced the crowd to their made-up “soon to-be olympic sport” competitive crowd-surfing which lead singer Felix Brummer wins defying a winning streak by guitarist Steffen Isreal. 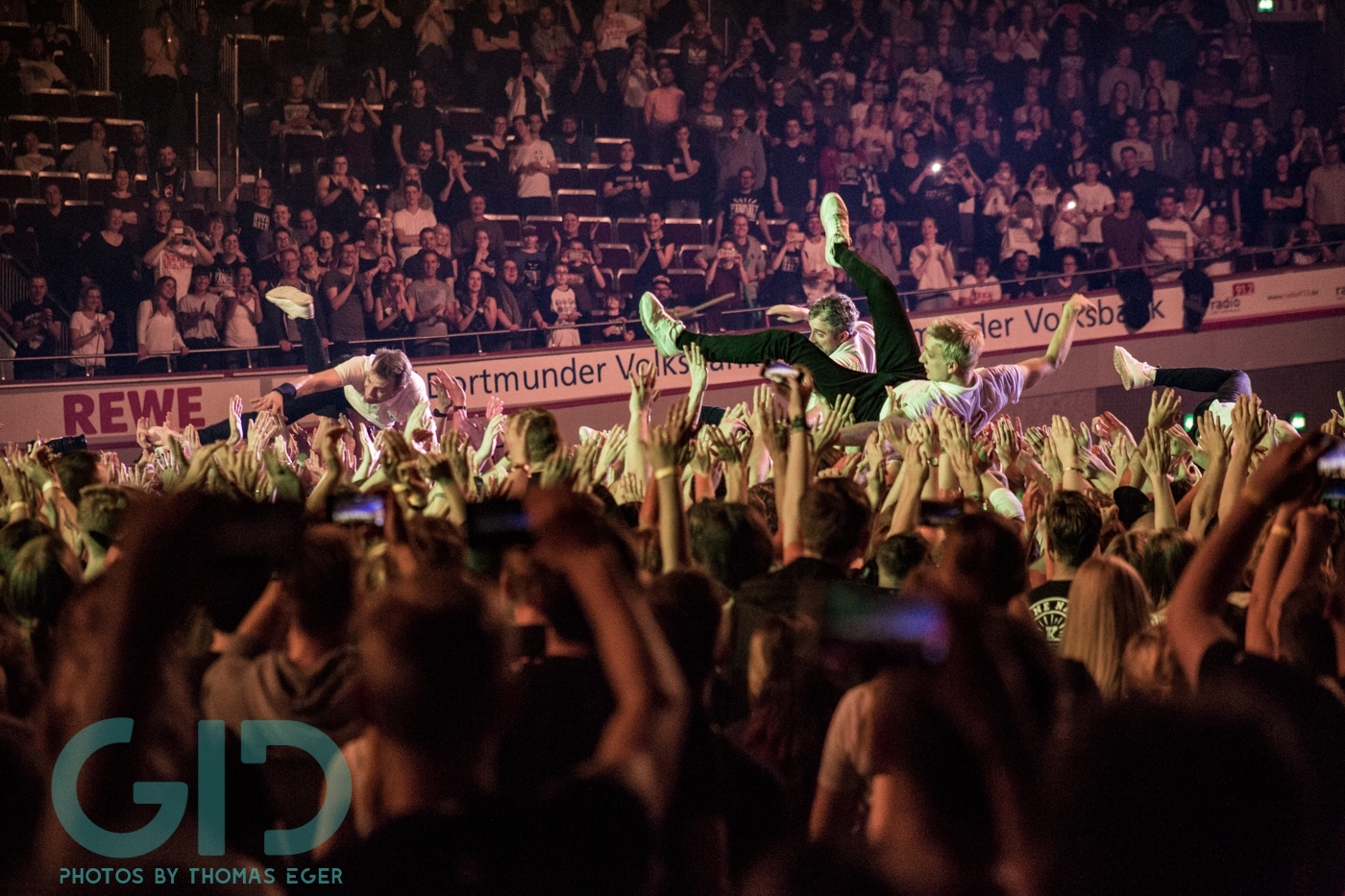 Back on stage, the band concluded the set with “Blau” and “Songs Für Liam” their most successful song to date. During the bridge, which featured a crowd sing along of “Hey Jude”, the band stopped the song to ask the crowd to make room in the middle of them. Felix then invited two fans, Torven and Angelina (which he repeatedly confused with Angelika), in their midst. He explained that Torven messaged the band so he could have a special moment at the show. You can guess it: Torven proposed to Angelina in the middle of the mosh pit, she said yes. After many congratulations by fans and the band, the song continued with some improvised lines from Felix just to close out the song and the night with a huge amount of confetti. 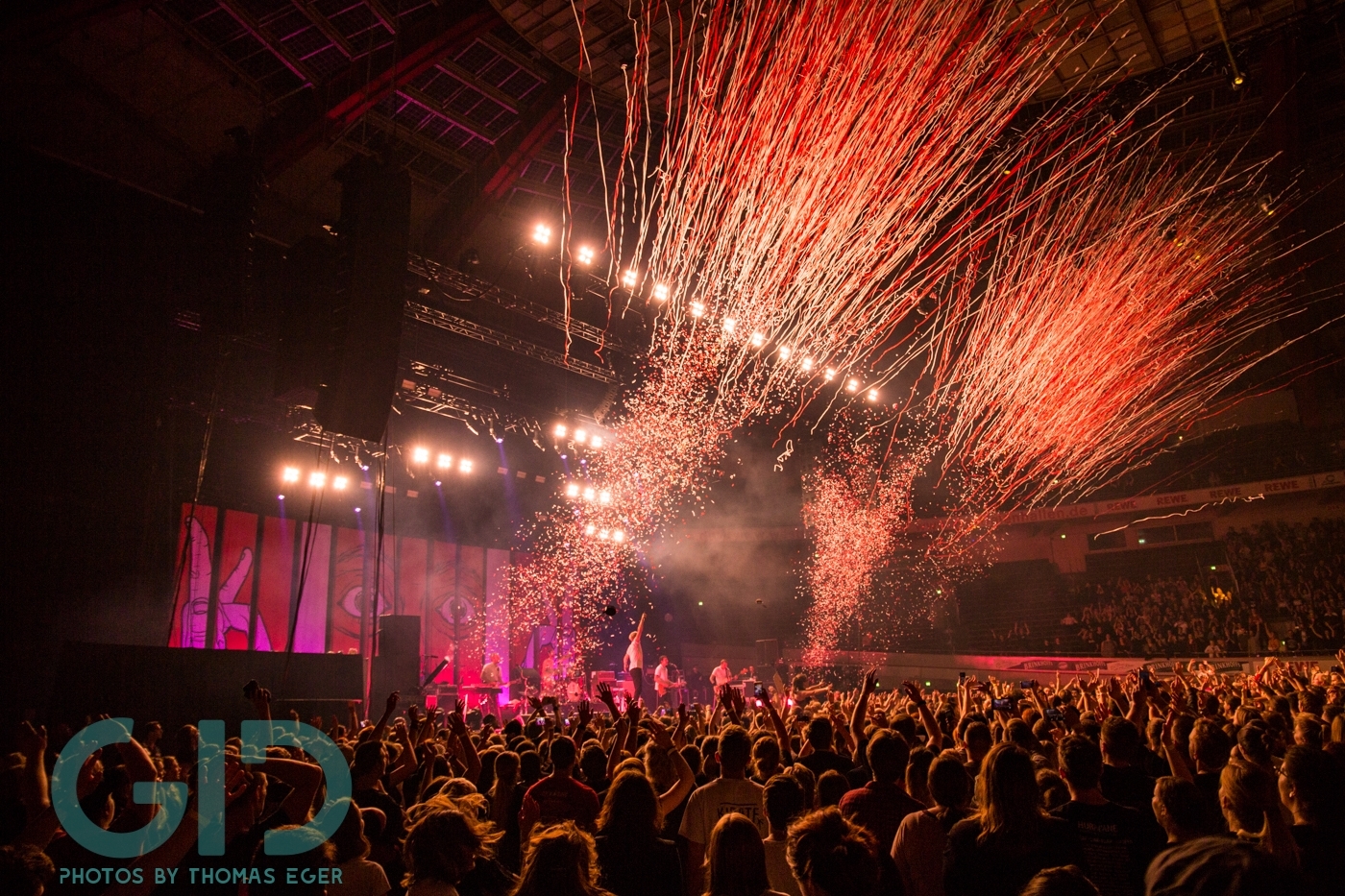 Check out the full gallery of the show HERE